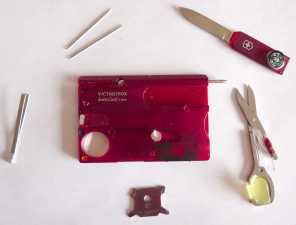 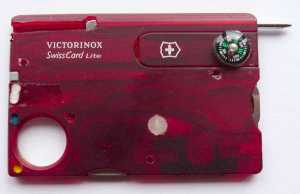 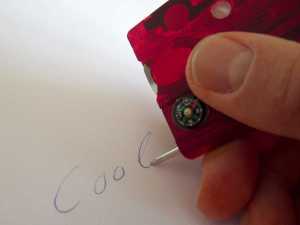 The Victorinox SwissCard, in this case the Victorinox SwissCard Lite is a very attractive concept, because it just fits perfectly inside a wallet while holding many useful tools, and I was naturally attracted to it after failing to always carry with me a tiny Victorinox knife, what happened then is that my tiny "Swiss army" knife with a pen was for a few years happily fitting with my keys, but then I got more keys and the tiny knife was just taking too much room, so I tried to carry it inside my wallet, but it was too thick to feel comfortable, therefore I remembered having seen these nice multi function cards, had a look around and bought the one having the most desirable tools for my situation, so I bought the Victorinox SwissCard Lite that is only 4.5 mm thick and fits fantastically inside my wallet! I enjoyed this nice situation for a while and then my natural temperament knock on the door again, I had to add a few more functions :-), so the first idea concerned the pen! The standard Victorinox SwissCard Lite ballpoint pen got to be completely removed to be used, so if you have large hands, relatively it's not so much surface to hold on and incidentally it increases the possibility to lose the ball pen. By the way I got used before to a small Victorinox pocket knife with a sliding ballpoint pen, so having the idea to transform the SwissCard removable ball pen into a SwissCard sliding ball pen was quite straight forward! Furthermore I like the idea of writing while holding on a card, it gives a good grip and I have never seen it around (searching a lot for it), so I had to make it :-) and share the steps : I think Victorinox could implement successfully a SwissCard with a gliding ballpoint pen on the market because : What next? I had fantastic reactions from the people who tried this new ballpoint pen card, so publishing and contacting Victorinox to have their opinion was a must do thing, and then I though gosh I could still add a few more things on this card, so I went on and the result is a card that have 15 more options than the original cards, having therefore a total of 28 functions on this modified Victorinox SwissCard Lite. Some of these 15 more options have been very easy to realize and works amazingly well considering the prototype state of this modified card, for example the wood saw just worked perfectly on a little piece of wood that would have been almost impossible to cut with the simple blade, and once again the modified result is lighter that the original tool. Being realistic too, some modifications were probably more fun to make than they will be useful, thinking specifically about the 3 little reserve of water colors that in association with a slightly changed tweezer could be used to write a few lines in case of a dry ball-pen! I hope I won't have to use them, but they look very nice on the card. So here is the complete list of 15 more functions added to the Victorinox SwissCard Lite : By the way a few more functions would be interesting, for example the back of the scissors doing an excellent bottle opener could be combined with a can opener by making the top part of the bottle opener sharp and more sturdy (can't reasonably do it myself, but it's probably a piece of cake for the Victorinox company, the main question being : is it reasonable to have a pair of scissors with an almost sharp handle? Of course it could be protected by a little piece of plastic when used as a pair of scissors, so it's probably reasonable to build it). The great flexibility of this SwissCard also appears because most tools are fully removable, so we can use both sides of the tools (not saying that the classical Victorinox multi-blades knifes technique is less interesting, it's just more appropriate in different situations, for example when things become rough we don't want to loose the little tools around, but at the same time in these situations, wallets are probably not the best place to store these tools).

This ballpoint pen is usable directly by holding this modified Victorinox SwissCard and feels very comfortable for most users, it also means that we are less likely to lose the little ball pen. Interestingly when counting only this modification the end result is lighter than the original card and would be quite easy to implement at the production level! At the inverse it's quite difficult to make at home because a special drill bit associated the capabilities to dig a proper ridge inside the plastic are necessary. More improvements : the little grey handle of the ballpen could be slightly soft and conductive, so it could be used as well on a smart-phone, and thinking about it it would also be possible to implement a corner of the card as an electronic rubber-pen.

A wood saw was added on the back of the knife blade! Actually one of the most surprising modification considering how fast it went to grind a few notches and how well it cut a piece of wood. Note : it's capital that the saw is made on the larger part of the blade because while leaving the original blade wire untouch it allows the saw to dig the wood easily because the part above the teeth is narrower. Also this sort of functional addition would not be possible with a classical Victorinox pocket knife because the saw would fold itself in when used. 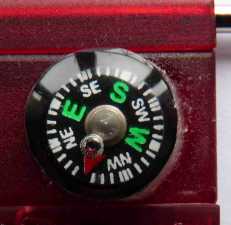 A compass was added on the back of the knife. It was the most difficult device to add, especially because the original compass needed a strong plastic sanding to be able to fit inside the knife handle. In fact I wasted the 1st compass that spilled its liquid over and I was much more careful for the second, knowing were to stop sanding and reinforcing it once in place with a two component glue as well as making a small notch on the side of the blade so the knife can be pulled out without pulling directly on the compass. 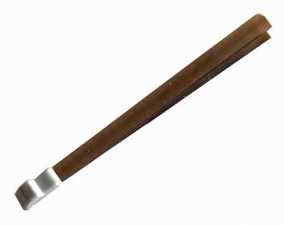 A modified pair of tweezers allows tweezers writing with some ink stacked between the branches and the rounded tip gliding on the paper, it's roughly possible to write two large characters lines like that when maintained manually the branches as close as possible so the ink will stay by capillarity. With a better optimization it is possible to implement a little ring that would maintain the branches as an optimal distance while allowing the user to have ink free fingers. 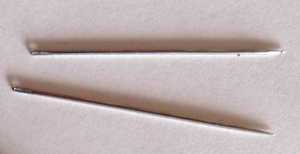 Surprise the tweezers sheath is much longer than the tweezers so it gives plenty of space to store something else, like two needles in this case, but not three, because it increases dramatically the risk of the needles getting stacked inside the sheath and of course it happened during the trials, this is why there is a little hole close to the bottom of the sheath (it was used to remove the stacked needles) and in between it remove a few characters of the "Swiss MADE" branding, so I had to erase it completely to avoid a ridiculous look.

Two holes have been drilled here to store a bit of soap, just enough to wash ones hands before eating something. Really an emergency soap considering how long it takes to pack it inside the card and how fast it could be used and gone :-) But the challenge was to find a few different ways to use these holes, and soap, dental floss and paint were my best shot at this problem. 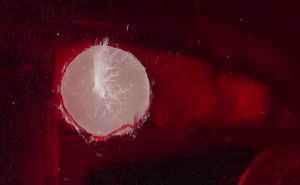 And here we have the dental floss reserve, the amazing part is that we can store about one meter of dental floss inside this tiny space (actually the largest of the spaces accessible by drilling). The lid was made with some candle wax, an idea coming naturally considering the fact that the floss is waxed too. 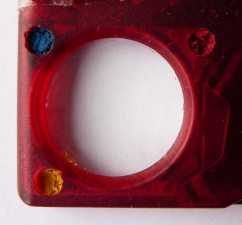 The three colors spots, drilled and filled with respectively blue, yellow and red water based colors (3 more functions :-) Can be quickly used using the round part of the tweezers to write a few lines of text, see the tweezers explanation for more details on this implementation. The scissors is very interesting in term of multi functionalities on very different objetcs, so the added functions are : 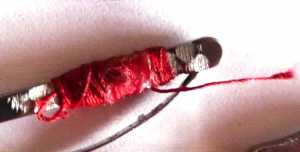 A coil of about one meter of red thread is in place around the handle of the scissors. A handle that was grinded on its thickness only so the scissor could move in freely with the extra thread. A small drop of wax was used to seal it on the spot (emergency thread only). 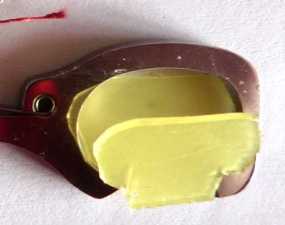 The handle was cut to make more room for the fingers and at the same time to have more room to store a little folder in between going to hold something very special, tests are ongoing, and the results are going to be published here! Meanwhile anything small and flat could fit in there, it just need to be useful enough to make up for the need to take care of it specially when needing another part of the scissors. 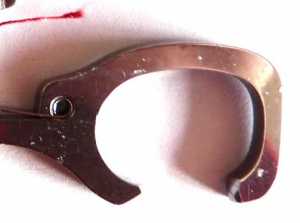 Once the handle was cut it really looked like a bottle opener (did not think about it before!), so I tried it straight away and it didn't work, but sharpening the bottom side like a little tooth was enough to have a nice little bottle opener working perfectly fine! It's just necessary to be careful when holding it, because there is a serious risk to get a cut from the scissors, so wrapping it before with a tissue is strongly advisable. Let's also point that if that scissor handle was larger it would be possible to add the can opener function, because we already get the toothed hook from the bottle opener, we would just need a sharp top.

The two cards side by side when fully compacted and a bit dusty! Dusty? We are talking about prototyping here after sawing, grinding, grooving and stucking soap, floss, paint, thread and wax around to have a nice portable device, so the dust is the instant graphical difference with professional picture of a marketed device and may by the way help the general understanding. 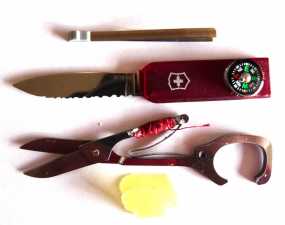 The main modified tools pulled out on a single picture! But it does not represent the main added function of this card : the possibility to write directly with the card! Note : the ballpen was slightly changed so it could grip inside its writing position notch, but the modification hardly deserve a specific picture of the bsllpen alone. And one more function with 2 traversing holes to fix anything, I did not count it inside the 15 + options because things clipped on this modified Victorinox Swisscard with a rubber band are not really a part of the card and in fact the rubber band itself was terrible for the look of the card while also adding more thickness. Comparison between the card approach and the small pocket knife approach for multitools sets for a roughly identical size of the tools : At this stage it's important to note that all the Victorinox Swisscard have the same ballpens implementation style, therefore all of them can sustain the sliding and writing with the card ballpen implementation! Below the three types of Victorinox Swisscards : Last few words in a nutshell : it was very interesting to make these modifications and the reactions were very encouraging, therefore I hope it will be largelly useful.
Laurent Fawer
Ataox a CMS adapted for Search Engine Optimization.